Michael Eugene Porter is an academic known for his theories on economics, business strategy, and social causes. He is a University Professor at Harvard Business School.

Porter’s Five Forces Framework is a tool for analyzing the competition of a business. It draws from economics to derive five forces that determine the competitive intensity and, therefore, the attractiveness of an industry in terms of its profitability.

An “unattractive” industry is one in which the effect of these five forces reduces overall profitability. The most unattractive industry would be one approaching “pure competition,” in which available profits for all firms are driven to normal profit levels. 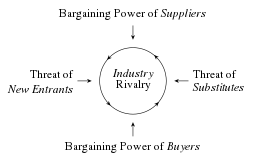 According to the Porter Hypothesis, strict environmental regulations can actually lead to efficiency and innovations that help improve commercial competitiveness.

The hypothesis predicts that environmental regulation triggers the discovery of cleaner technologies and environmental improvements. Innovation in the process makes production and products more efficient. Cost savings can also be achieved to compensate for the compliance costs.

Porter’s Four Corners Model is a planning tool that helps to forecast a competitor’s course of action. Porter’s model recommends a deeper understanding of what motivates competitors.

“The essence of strategy is choosing what not to do.”

“Strategy 101 is about choices: You can’t be all things to all people.”

“Strategy is about making choices, trade-offs; it’s about deliberately choosing to be different.”

“Sound strategy starts with having the right goal.”

“Competitive strategy is about being different. It means deliberately choosing a different set of activities to deliver a unique mix of value.”

“If all you’re trying to do is essentially the same thing as your rivals, then it’s unlikely that you’ll be very successful.”

“Sound strategy starts with having the right goal.”

“Strategy is about making choices, trade-offs; it’s about deliberately choosing to be different.”

“Strategy must have continuity. It can’t be constantly reinvented.”

“A strategy delineates a territory in which a company seeks to be unique.”

“Consumers tend to be more price-sensitive if they are purchasing products that are undifferentiated, expensive relative to their incomes, or of a sort where quality is not particularly important to them.”

“Quality differentials have a tendency to erode as an industry matures.”

“The essence of strategy is that you must set limits on what you’re trying to accomplish.”

“Companies operating in urban communities have a tremendous ripple effect.”

“Without a goal analytics is aimless and worthless.”

“Cash Cows: Businesses with a high relative share in low-growth markets will produce healthy cash flow, which can be used to fund other, developing businesses.”

“History tells us that monopolies that are truly benevolent and effective are rare.”

“Businesses must reconnect company success with social progress. Shared value is not social responsibility, philanthropy, or even sustainability, but a new way to achieve economic success. It is not on the margin of what companies do but at the center.”

“The company without a strategy is willing to try anything.”

“You can’t be all things to all people.”

“Good leaders need a positive agenda, not just an agenda of dealing with a crisis.”

“If all you’re trying to do is essentially the same thing as your rivals, then it’s unlikely that you’ll be very successful.”

“Innovation is the central issue in economic prosperity.”

“The best CEOs I know are teachers, and at the core of what they teach is strategy.”

“Billions are wasted on ineffective philanthropy. Philanthropy is decades behind business in applying rigorous thinking to the use of money.”

The essence of formulating strategy is relating a company to its environment.

“A target should go with every goal. A target is the value that defines success.”

“Change brings opportunities. On the other hand, change can be confusing.”

Michael Porter: Why business can be good at solving social problems