Stephen Covey (1932 – 2012) was an educator, author, and businessman. His most popular book is “The 7 Habits of Highly Effective People.” In 1996, Times magazine named him one of the 25 most influential people. He was a professor at the Jon M. Huntsman School of Business at Utah State University at the time of his death.

Stephen Covey’s most popular books include:

The 7 Habits of Highly Effective People

The 7 Habits of Highly Effective People was first published in 1989, by Stephen Covey. Covey presents an approach to being effective in attaining goals. Covey’s book has sold more than 25 million copies worldwide. The audio version became the first non-fiction audio-book in U.S. publishing history to sell more than one million copies.

“Be Proactive” is about taking responsibility for your reaction to your experiences, and to taking the initiative to respond positively to improve the situation.

Habit 2: Begin with the End in Mind

“Begin with the End in Mind” is about envisioning what you want in the future so you can work and plan towards it.

“Put First Things First”, talks about the difference between leadership and management. Ths habit distinguishes between what is important and what is urgent. Priority should be given in the following order: 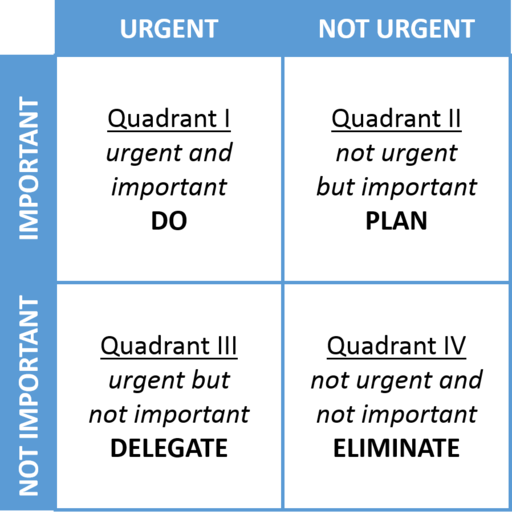 “Think Win/Win” is about a “win” for all is ultimately a better long-term resolution than if only one person in the situation had gotten their way.

Habit 5: Seek First to Understand, Then to Be Understood

“Seek First to Understand, Then to Be Understood” is about using empathetic listening to genuinely understand a person. This, in turn, compels them to reciprocate and take an open mind to be influenced by you.

“Synergize!” is about combining the strengths of people through positive teamwork, to achieve goals that no one could have done alone.

“Sharpen the Saw” is about continuous improvement in the personal and interpersonal spheres of influence.

The 8th Habit: From Effectiveness to Greatness was written by Stephen R. Covey, published in 2004. The eighth habit is, “Find your voice and inspire others to find theirs.” The central idea of the book is the whole person paradigm, which holds that persons have four aspects – physical, intellectual, emotional, and spiritual. Denial of any of these reduces or diminishes an individual, inviting many problems.

Franklin Covey Co., trading as FranklinCovey, is a provider of time management training and assessment services. The company was formed in 1997, as a result of an acquisition by Franklin Quest of Stephen R. Covey’s Covey Leadership Center.

Among other products, the company markets the FranklinCovey planning system, modeled in part on the writings of Benjamin Franklin, and The 7 Habits of Highly Effective People, based on Covey’s research.

“Link yourself to your potential, not to your past.”

“There are three constants in life – change, choice, and principles.”

“He who has a why can deal with any what or how.”

“Each of us guards a gate of change that can be opened only from the inside.”

“Seek first to understand, and then to be understood.”

“The key is not to prioritize what’s on your schedule but to schedule your priorities.”

“Listen with your eyes for feelings.”

“Start small, make a promise. and keep it. Then, make larger promises and keep them.”

“Setbacks are inevitable; misery is a choice.”

“Live out of your imagination, not your history.”

“In relationships, the little things are the big things.”

“It is possible to be busy-very busy-without being very effective.”

“Sow a thought, reap an action; sow an action, reap a habit; sow a habit, reap a character; sow a character, reap a destiny.”

“Courage is not the absence of fear but the awareness that something else is more important.”

“We judge ourselves by our intentions. And others by their actions.”

“Motivation is a fire from within. If someone else tried to light that fire under you, chances are it will burn very briefly.”

“Highly proactive people don’t blame circumstances, conditions or conditioning for their behavior. Their behavior is their own conscious choice.”

“Our character is basically a composite of our habits because they are consistent. Often unconscious patterns, they constantly, daily, express our character.”

“Don’t argue for other people’s weaknesses. Don’t argue for your own. When you make a mistake, admit it, correct it, and learn from it- immediately.”

“Habit is the intersection of knowledge (what to do), skill (how to do), and desire (want to do).”

“Every human has four endowments – self-awareness, conscience, independent will and creative imagination. These give us the ultimate human freedom. The power to choose, to respond, to change.”

“There’s no better way to inform and expand your mind on a regular basis than to get into the habit of reading good literature.”

“The proactive approach to a mistake is to acknowledge it instantly, correct and learn from it. “

“But until a person can say deeply and honestly, “I am what I am today because of the choices I made yesterday,” that person cannot say, “I choose otherwise.”

“Make time for planning; Wars are won in the general’s tent.”

“You have to water the flowers you want to grow.”

“If you put good people in bad systems, you get bad results.”

“Trust is the glue of life. It’s the most essential ingredient in effective communication. It’s the foundational principle that holds all relationships.”

“The only thing that endures over time is the Law of the Farm. You must prepare the ground, plant the seed, cultivate, and water it if you expect to reap the harvest.”

“The key is not to prioritize what’s on your schedule, but to schedule your priorities.”

“Don’t get buried in the thick of thin things.”

“Effective people are not problem-minded; they’re opportunity-minded. They feed opportunities and starve problems.”

“The wonderful thing is that vision is greater than baggage.”

“If two people have the same opinion, one is unnecessary.”

“A mission statement is not something you write overnight… But fundamentally, your mission statement becomes your constitution, the solid expression of your vision and values. It becomes the criterion by which you measure everything else in your life.”

“Treat your employees exactly as you want them to treat your best customers.”

“Seek to understand before you seek to be understood.”

“Be a light, not a judge. Be a model, not a choice. be part of the solution not part of the problem.”

“Begin with the end in mind.”

“You can buy a person’s hands, but you can’t buy his heart.”

“Being influenceable is the key to influencing others.”

“Leadership is a choice, not a position.”

“Strength lies in differences, not in similarities.”

“I teach people how to treat me by what I will allow.”

“Any time we think the problem is “out there,” that very thought is the problem.”

“Empathy takes time, and efficiency is for things, not people.”

“We develop our character muscles by overcoming challenges and obstacles.”

“If you wish to communicate effectively and to influence others, you would need to understand them first. And understanding can only come from listening.”

“How you treat the one reveals how you regard the many because everyone is ultimately a one.”

“My experience tells me that people instinctively trust those whose personality is founded upon correct principles.”

“Empathy is not sympathy. Sympathy is a form of agreement. Empathy is not agreeing with someone; it is fully, deeply understanding that person, emotionally as well as intellectually.”

“You have to decide what your highest priorities are and have the courage – pleasantly, smiling, non-apologetically – to say ‘no’ to other things. And the way to do that is by having a bigger ‘yes’ burning inside.”