Coaching insights from successful Chinese Business Leaders can provide meaningful insights that can help illuminate your journey. These tips can also help you when dealing with Chinese stakeholders.

The people below have been ranked multiple times in various authority lists, as the Most Powerful, and Wealthiest Businesses Leaders of Influence in China.

“Things get much easier if one jumps on the bandwagon of existing trends.” – Lei Jun

“If you ask me what I worry about every morning when I wake up, it’s that I don’t understand future mainstream Internet users’ habits.” – Ma Huateng

“You need to have extraordinary wisdom to be the forerunner.” – Ma Huateng

“But every person must have the desire to push oneself to the limit!” – Liu Qiangdong

“If you are a wolf chasing rabbits, focus on one rabbit. Change yourself to catch the rabbit, but don’t change rabbits.” – Jack Ma

“People who get rich early should help the rest get rich.” – Zong Qinghou

“Wealth won’t give you satisfaction; creating a good product that is well received by users is what matters most.” – Ma Huateng

“Opportunity lies in the place where the complaints are.” – Jack Ma

“The leader of the market today may not necessarily be the leader tomorrow.” – Ma Huateng

“The future of the world’s film industry is in China because we have 1.3 billion people.” – Wang Jianlin

“Sooner or later, our entire industry will be operated by AI (artificial intelligence) and robots, not humans.” – Liu Qiangdong 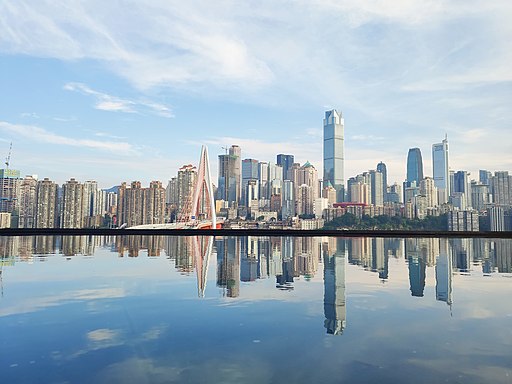 Chongqing, one of the largest cities in China

“In setting goals and executing a strategy, Wanda is sophisticated. We have good systems and departments. If targets are not reached, a yellow light goes off.” – Wang Jianlin

“The U.S. and European markets have become mature, profit margins are lower, and equipment isn’t so new. Because profits are relatively low, it limits the willingness of companies to invest in newer equipment.” – Zong Qinghou

“On all open platforms, regardless of whether it’s Facebook or the Apple App Store, the largest segment is entertainment and games. It’s the largest revenue segment. And it’s the same for Tencent.” – Ma Huateng

“China is a government-oriented economy. No one can say he can run his business entirely without government connections. Anybody who says that he or she can do things alone… is a hypocrite.” – Wang Jianlin

“Success and profitability are outcomes of focusing on customers and employees, not objectives.” – Jack Ma

“China’s movie industry is growing a lot faster than that of the U.S.” – Wang Jianlin

“My next goal is for Shenzhen to become the model of environmentally-friendly and sustainable development.” – Wang Shi

“I look at an issue by comparing it with history. A person that has suffered famine and a person that hasn’t will have very different feelings towards a bowl of rice.” – Liu Chuanzhi

“In a globalized economy, it’s very difficult for the U.K. to go it alone. Don’t listen to politicians. Politicians say if the U.K. leaves, things will be better. I’m telling you, leaving could make things worse.” – Wang Jianlin

“Remain close to the government and away from politics. It means deal more with the authorities. And less with individuals.” – Wang Jianlin

“No entrepreneur ever publicly admits to bribing, but few dare to openly claim they don’t, either.” – Wang Shi

“In China, you have to have a strong leader for a business to get anything done.” – Zong Qinghou

“In the West, if a city faces financial difficulties, it’ll go bankrupt. But in China, cities will be subsidized by the Ministry of Finance. So some small- and medium-sized cities aren’t worried about going bankrupt. They figure the central government will help them out.” – Wang Shi

“I think Steve Jobs is my idol.” – Ma Huateng

“Among the worlds 500 largest companies, not one has completely relied on its own growth to develop.” – Wang Jianlin

“But copying others can’t make you great. So the key is how to localize a great idea and create domestic innovation.” – Ma Huateng

“We are lucky that Steve Jobs has such a bad temper and doesn’t care about China. If Apple were to spend the same effort on the Chinese consumer as we do, we would be in trouble.” – Liu Chuanzhi

“I believe wealth should be in the hands of those who know how to create more wealth.” – Zong Qinghou

It’s easy not to bribe. But it’s not so easy to keep a business running at the same time. – Wang Shi

“Try to find the right people, not the best people.” – Jack Ma

“The basic principle is I command, and my employees carry it out immediately.” – Wang Jianlin

“The industry is on the rise and its beauty lies in its uncertainty, but we are passionate and interested in exploring the unknown.” – Ma Huateng

“If the nation is rich but people are poor, the country cannot be strong, and society will be unstable.” – Zong Qinghou

“There’s nothing wrong with being No. 1 worldwide.” – Wang Jianlin

Guangzhou, largest city of the province of Guangdong in southern China.

“The public doesn’t have to be hostile to the rich. ‘Robbing the rich to help the poor’ will only drive the rich away to other countries along with their money. As a matter of fact, their wealth should be respected. All wealth in China belongs to the country.” – Zong Qinghou

“In America, when you bring an idea to market, you usually have several months before competition pops up, allowing you to capture significant market share. In China, you can have hundreds of competitors within the first hours of going live. Ideas are not important in China – execution is.” – Ma Huateng

“You must still stand up and say no when society is facing a backslide or a moment of danger.” – Wang Shi

“A leader should have higher grit and tenacity, and be able to endure what the employees can’t.” – Jack Ma

Interesting Facts and Insights about doing Business with Chinese

Did these Coaching Tips from Chinese Business Leaders inspire you?

China’s size makes it matter. One in five of all the people in the world lives in China. It is currently the world’s second-largest economy. China accounts for over 10 percent of the world economy and about a quarter of global growth in recent years. China is one of the largest trading partners for most countries.

Coaching Tips from Chinese Business Leaders is an essential reading for anyone who has Chinese stakeholders, whether they be managers, staff, customers, suppliers or partners.

Books About doing Business with Chinese