“Relationships and trust. This is the bedrock of life.”

“Fill your years and minds with melodies of optimism.”

“Tune out the critics and cynics.”

“It is important to achieve our goals, but not at any cost.”

“Dance to your own music and take some risks in life, because it is often the risk-taker who changes the course of history, and contributes to the well-being of millions of lives.”

“It is important to remember, there are no overnight successes. You will need to be dedicated, single-minded, and there is no substitute for hard work.”

“The important thing which I’ve really learned is how do you not give up, because you never succeed in the first attempt.”

“My father shared with me his passion for business and entrepreneurship from very early on. Even when I was in high school, I used to spend long hours at the office on weekends.”

“Any business that has the sole purpose of making money is not worth doing.”

“In the journey of an entrepreneur, the most important thing is self-belief and the ability to convert that belief into reality.”

“You have to manage the money. Particularly with market economies. You may have a great product, but if your bottom line goes bust, then that’s it.”

“The World has moved to the power of ideas.”

“China and India will, separately and together, unleash an explosion of demand.” 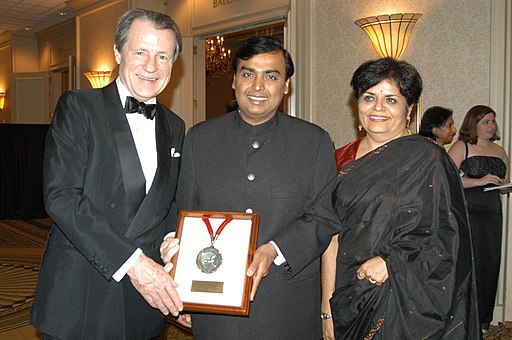 Mukesh Ambani has been awarded the Asia Society Leadership Award

“All of us know that the energy from the sun can now be harnessed, and we need to convert it sensibly to use it.”

“I am personally a big believer that technology is the biggest driver of human development, and if you can use technology to benefit people, then that’s the best business you can have.”

“My view is to give everyone the space to grow in his own way.”

“I generally think that I should only speak by action and not by words.”

“I am a big believer that technology shapes mankind”

“The future lies in becoming a strong economic power. Dominance in the world will come only from how well a nation can cope with economic realism and towards that India must work, must find its own place under the sun.”

“Our established businesses of hydrocarbons, energy, and petrochemicals pretty much run on their own, with their own proven leaders. This has helped me focus almost exclusively on two things: Firstly, new businesses. And secondly, institutionalizing what I call the Reliance Management System.”

Mukesh Dhirubhai Ambani (born 1957) is an Indian businessman, the chairman, managing director, and largest shareholder of Reliance Industries Limited (RIL), one of India’s most valuable company by its market value. According to Forbes magazine, he is one of the richest men in Asia.

Reliance Industries Limited (RIL) is an Indian multinational conglomerate that owns businesses across India engaged in energy, petrochemicals, textiles, natural resources, retail, and telecommunications. Reliance is one of the most profitable companies in India.

Ambani resides at the Antilia Building, one of the world’s most expensive private residences.