“Sometimes life is going to hit you in the head with a brick. Don’t lose faith.”

“You can’t connect the dots looking forward; you can only connect them looking backward. So you have to trust that the dots will somehow connect in your future.”

“Sometimes when you innovate, you make mistakes. It is best to admit them quickly, and get on with improving your other innovations.”

“Be a yardstick of quality. Some people aren’t used to an environment where excellence is expected.”

“Don’t let the noise of other’s’ opinions drown out your own inner voice.”

“Everything around you that you call life, was made up by people that were no smarter than you.”

“I’m convinced that the only thing that kept me going was that I loved what I did. You’ve got to find what you love.”

“For the past 33 years, I have looked in the mirror every morning and asked myself: ‘If today were the last day of my life, would I want to do what I am about to do today?’ And whenever the answer has been ‘No’ for too many days in a row, I know I need to change something.”

“Remembering that you are going to die is the best way I know to avoid the trap of thinking you have something to lose. You are already naked. There is no reason not to follow your heart.”

“Getting fired from Apple was the best thing that could have ever happened to me. The heaviness of being successful was replaced by the lightness of being a beginner again. It freed me to enter one of the most creative periods of my life.”

“Your time is limited, so don’t waste it living someone else’s life.”

“Have the courage to follow your heart and intuition. They somehow already know what you truly want to become. Everything else is secondary.”

“Have the courage to follow your heart and intuition. They somehow already know what you truly want to become.”

“Innovation distinguishes between a leader and a follower.”

“Get closer than ever to your customers. So close that you tell them what they need well before they realize it themselves.”

“We hire people who want to make the best things in the world.”

“That’s been one of my mantras – focus and simplicity.”

“If you are willing to work hard and ask lots of questions, you can learn business pretty fast.”

“Picasso had a saying – ‘good artists copy, great artists steal‘ – and we have always been shameless about stealing great ideas.”

“It’s really hard to design products by focus groups. A lot of times, people don’t know what they want until you show it to them.”

“To me, marketing is about values.”

“You gotta act. And you’ve gotta be willing to fail, you gotta be ready to crash and burn, with people on the phone, with starting a company, with whatever. If you’re afraid of failing, you won’t get very far.”

“I don’t care about being right. I care about the success and doing the right thing.”

“I want to put a ding in the universe.”

“The doers are the major thinkers. The people that really create the things that change this industry are both the thinker and doer in one person.”

“Let’s go invent tomorrow rather than worrying about what happened yesterday.”

“I do not adopt softness towards others because I want to make them better.”

“My job is to say when something sucks rather than sugarcoat it.”

“My favorite things in life don’t cost any money. It’s really clear that the most precious resource we all have is time.”

“Being the richest man in the cemetery doesn’t matter to me. Going to bed at night saying we’ve done something wonderful, that’s what matters to me.”

“The people who are crazy enough to think they can change the world are the ones who do.”

“The culture is your brand.”

“You get your wind back, remember the finish line, and keep going.”

“Don’t get hung up on who owns the idea. Pick the best one, and let’s go.”

“I’m convinced that about half of what separates successful entrepreneurs from the non-successful ones is pure perseverance.”

“I like interacting in the world of ideas, though somehow those ideas have to be tied to some physical reality. One of the things I like the most is dropping a new idea on a bunch of incredibly smart and talented people and then letting them work it out themselves. I like all of that very, very much.”

Steven Jobs (1955 – 2011) was an American business magnate and investor. He was the chairman, CEO, and co-founder of Apple Inc. Jobs is widely recognized as a pioneer of the microcomputer revolution of the 1970s and 1980s.

Jobs was forced out of Apple in 1985 after a long power struggle with the company’s board and its then-CEO. Jobs returned in 1997 to Apple and was largely responsible for helping revive Apple, which had been on the verge of bankruptcy.

Jobs championed the development of a line of products that led to the iMac, iTunes, iTunes Store, Apple Store, iPod, iPhone, App Store, and the iPad. Jobs was diagnosed with a pancreatic neuroendocrine tumor in 2003. He died of respiratory arrest related to the tumor at age 56 in 2011. 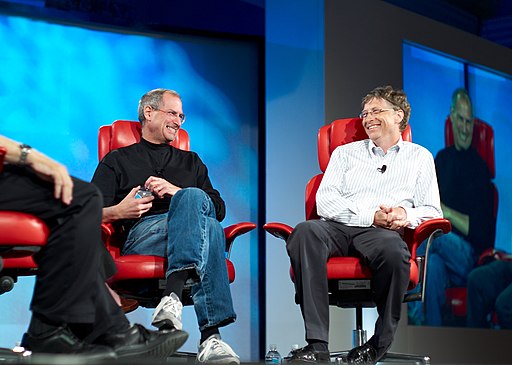 Steve Jobs and Bill Gates at ‘All Things Digital’ conference, 2007

Mini MBA of the Big Ideas that have shaped Careers, Leadership, and Business.

“Strategies for Influence” explores and shares the BIG IDEAS from the Leaders of Influence that can help you with your Career, Business, and Leadership. Click on any of the links below for a Min-MBA on the Big Ideas that have influenced our work and culture.

Steve Jobs MIT Class: What he learned after he was fired from Apple?