“It’s better to hang out with people better than you.”

“No matter how great the talent or efforts, some things take time.”

“People always ask me where they should go to work, and I always tell them to go to work for whom they admire the most.”

“You’ve gotta keep control of your time, and you can’t unless you say no. You can’t let people set your agenda in life.”

“Tell me who your heroes are and I’ll tell you who you’ll turn out to be.”

“Chains of habit are too light to be felt until they are too heavy to be broken.”

“Honesty is a very expensive gift. Don’t expect it from cheap people.”

“Read 500 pages every day. That’s how knowledge works. It builds up, like compound interest.”

“I learned to go into business only with people whom I like, trust, and admire.”

“Risk comes from not knowing what you’re doing.”

“You can’t make a good deal with a bad person.”

“Beware the investment activity that produces applause; the great moves are usually greeted by yawns.”

“Time is the friend of the wonderful company, the enemy of the mediocre.”

“In the world of business, the people who are most successful are those who are doing what they love.”

“It’s never paid to bet against America. We come through things, but it is not always a smooth ride.”

“Buy a stock the way you would buy a house. Understand and like it such that you’d be content to own it in the absence of any market.”

“Wide diversification is only required when investors do not understand what they are doing.”

“The stock market is designed to transfer money from the active to the patient.”

“Remember that the stock market is a manic depressive.”

“Our favorite holding period is forever.”

“If past history was all there was to the game, the richest people would be librarians.”

“Only buy something that you’d be perfectly happy to hold if the market shut down for 10 years.”

“Diversification is protection against ignorance. It makes little sense if you know what you are doing.”

“It takes 20 years to build a reputation and five minutes to ruin it. If you think about that, you’ll do things differently.”

“It’s only when the tide goes out that you discover who’s been swimming naked.”

“We believe that according the name ‘investors’ to institutions that trade actively is like calling someone who repeatedly engages in one-night stands a ‘romantic.'”

“Wall Street is the only place that people ride to in a Rolls Royce to get advice from those who take the subway.”

“Someone’s sitting in the shade today because someone planted a tree a long time ago.”

Warren Buffett (born 1930) is an American business magnate, investor, and philanthropist. He is considered one of the most successful investors in the world and has a net worth of over US$80 billion, making him one of the wealthiest people in the world.

Buffett first took control of Berkshire Hathaway Inc., in 1965. One Berkshire Hathaway share price at the time was $18. Fifty years later, the same one share is worth today over or around $200,000. The compounding investor capital is about 20% per year a multiplier or over 12,000 times.

Berkshire Hathaway Inc. is a conglomerate holding company headquartered in Omaha, Nebraska, United States. Berkshire Hathaway has averaged an annual growth in value of about 19% for its shareholders since 1965, compared to about 10% from the S&P 500. Warren Buffett serves as chairman and chief executive. 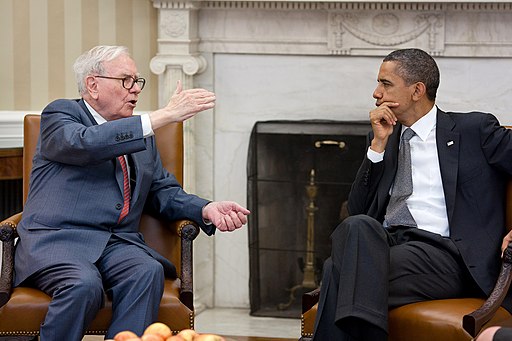 Mini MBA of the Big Ideas that have shaped Careers, Leadership, and Business.

“Strategies for Influence” explores and shares the BIG IDEAS from the Leaders of Influence that can help you with your Career, Business, and Leadership. Click on any of the links below for a Min-MBA on the Big Ideas that have influenced our work and culture.

Warren Buffett reveals his investment strategy and mastering the market